Cats with Down Syndrome: Is It Possible?

Home » FAQ » Cats with Down Syndrome: Is It Possible?

Our planet is home to millions of living animals. Regularly, many of different animal species are still being discovered by scientists around the world. Like the constant discovery of new animal species, there are still some interesting materials about known animals that scientists need to further evaluate and explore. One of these is the reported cases of cats having Down syndrome.

The Internet has a pool of write-ups about cats with Down syndrome. There are even photos and documentation of the cats with down syndrome. Unfortunately, these can only be false cases (unless proven otherwise).

A human cell has twenty-three pairs of chromosomes and Down syndrome arises in people suffered by a genetic mutation that gives them three copies of chromosome 21. The genetic construction of non-human animals is too different from that of humans to enclose that the duplication of the same chromosome would have the same effects to the ones looked on in humans. Moreover, there are many animals that don’t even have chromosome 21; cats, for example, have only nineteen pairs of chromosomes.

Humans and animals can share a variety of different diseases and illnesses. Though they may appear and present differently in the two, animals can get genetic disorders too. However, Down syndrome in animals is more a myth than reality. Is Down syndrome a mutation? It should be noted that animal’s deformities are the result of generations of inbreeding rather than the kind of chromosomal mutation that considers for Down syndrome in humans.

Scientists and researchers can imitate trisomy in mice, to use them as a disease model to investigate genetic processes. Nevertheless, there are very few facts on animals that may have the syndrome.

Can Cats Have Down Syndrome?

There is a tendency among cat owners to assign human qualities and propensities to their pets. This includes the perseverance that their animals can smile, but it can also spread to explanations for their action. As some health problems influence both people and cats, the cause of Down syndrome in felines helps to classify it as an issue that can’t go both ways.

To assess the possibility of the existence of Down syndrome in cats, it is necessary to understand the difference with human chromosomes. So how many chromosomes do cats have?

As it happens when a human has more than forty-six chromosomes, and felines normally have thirty-eight (some feline in South America have only thirty-six cat chromosomes, for example), cats can’t have Down syndrome, which is a completely human disorder. Though, while animals can’t have Down syndrome in the official meaning, there are still physical and neurological defects and abnormalities that can affect cats. These problems can disturb the animal on a mental and intellectual level, leading to behavioral issues where they might not be responsive to you or to other elements in their environment.

The term “Feline Down syndrome” is indeed out there, but this is an unofficial disorder and cannot be given as an official diagnosis. If your cat has demonstrated bothering symptoms, the reason probably lies in a genetic or neurological complication – not down syndrome. 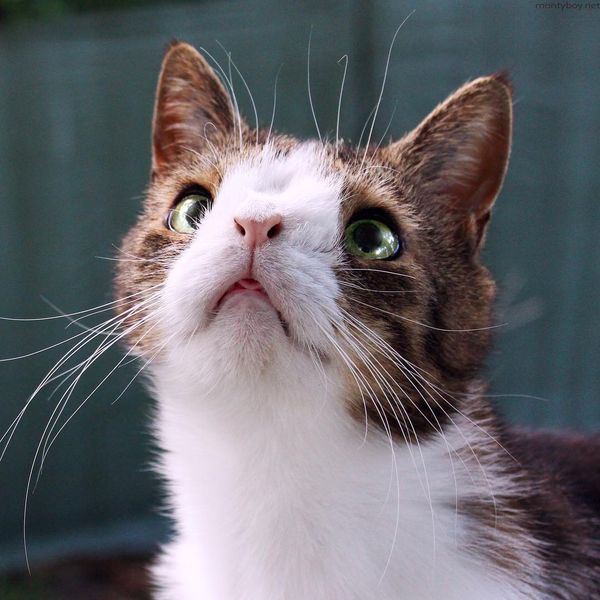 Despite the fact that cats can’t have trisomy 21, they sometimes have the physical characteristics of Down syndrome similar to humans. Cats like Monty are a good example here. Monty is the cat who has more Facebook followers than most of us could ever dream of, and two pitiful pet parents. Monty distinctly shows the outward of someone with Down syndrome: the wide-apart eyes, the lack of muscle tone, the poor coordination.

These features might make it look like a cat has Down syndrome, and it’s clear that the pet parent would think so. But, it isn’t possible for cats to have the exact type of Down syndrome that affects human beings. Feline Down syndrome is a thing though. It’s not officially admitted by doctors, but the name does get used from time to time when a cat exhibits Down syndrome-like characteristics. It’s important, though, to understand that not all the symptoms mean Down syndrome.

Cats with Down syndrome usually have such symptoms:

Felines that are thought to have conditions similar to Down’s syndrome incline to have abnormal behavioral, and they are often uncoordinated and clumsy, bumping into things and frequently falling down. Down’s syndrome cat may also sit differently than other cats, or have different vocalizations.

Kitten with Down syndrome-like conditions often behaves differently than other kittens in the same litter, and they tend to be a lot friendlier than other kittens, although they often do not respond when are called to.

Here are some things to consider if you think that you may have a cat that has a condition like Down syndrome:

A kitty may show strange behavior, to be a retarded cat, but this doesn’t automatically mean that it has Down syndrome. In fact, it may just be behavior that is unique to the cat, or another health problem that has not been diagnosed. There are many health issues linked with cats that can lead to a variety of symptoms that are much like those of Down syndrome.

Many breeders tend to over-breed their pets, and there is also inbreeding involved. If two animals with the same genetic structure mate, it is likely to produce offspring with birth defects, inbred cats. The same is seen in humans. It may not be that the cat has Down syndrome, but that it is a victim of inbreeding.

If a cat is thought to have Down syndrome, it could very well be a case of misdiagnosis, as it is impossible for cats to have that extra 21st chromosome. There could be other genetic disorders in cats at play, such as Klinefelter syndrome, which can cause physical mutation. As of yet, there is no scientific evidence that cats can be afflicted with Down syndrome.

There are 3 types of this syndrome, that each has a different presentation:

It’s an error in the process of cell division results in an embryo with 47 chromosomes, instead of 46. This is the most common type of Down’s syndrome, accounting for 95% of cases.

It occurs in around 1% of all cases. Some of the cells have 47 chromosomes (with extra 21st chromosome), while other cells have a normal chromosome count.

Be very attentive with how your cat looks and behaves. Some light changes may be an early warning sign of a bigger problem. Do a routine checking of your cat’s appearance and behavior so you are immediately alerted if something different is happening. 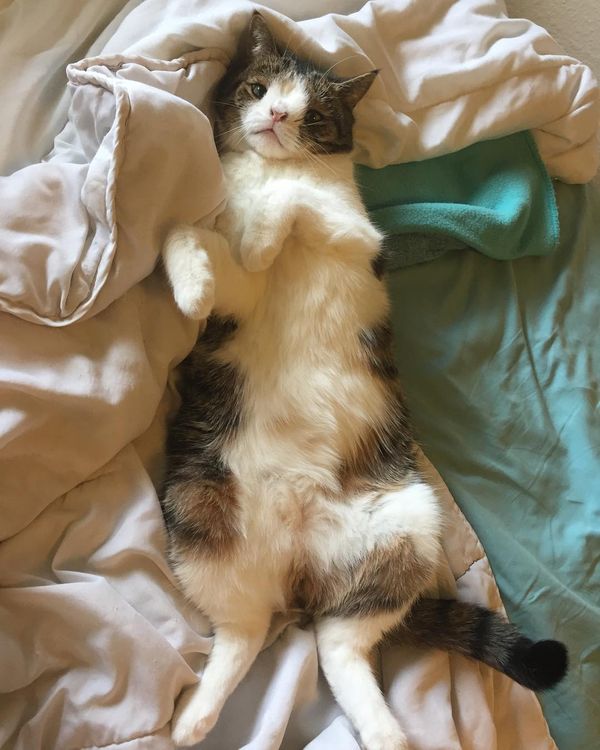 How to Take Care of a Down Syndrome Cat?

There is indeed an unofficial disorder called feline Down syndrome. It is not recognized as an official diagnosis because, as mentioned before, cats have a different chromosomal structure than humans, so they can’t have the actual Down syndrome.

If you think your cat may have a genetic disorder that has characteristics that are similar to Down syndrome, it is important to have your cat examined and diagnosed by a veterinarian. There are several things that could be going on, including cerebral hyperplasia, which causes poor balance and renal issues.

Kittens born by mothers with FPV (Feline Parvovirus) are inclined to cerebral hypoplasia, which is neither progressive nor contagious. Kittens with this condition are born with underdeveloped cerebellums, causing them to stagger when they walk. If you notice this in your cat, make an appointment with your vet right away so you can find out what you need to do in order to give your pet a healthy, happy life. The doctor can carry out blood work, X-rays, genetic testing, and other types of special tests in order to determine if a pet has specific healthcare needs. The important thing is to take your cat to the vet and not to make assumptions about the state of its health.
Cats with Down syndrome should be given extra attention compared to their normal companions. Obviously, all cats need to be loved and cared for, not to mention special needs cats.

If you think that your cat has Down syndrome, here are the ways to show you care:

Whether your cat has Down syndrome or not, you should give proper attention and love. Cats need tender love and care, just like human beings. They need attention, a healthy diet, and adequate healthcare. 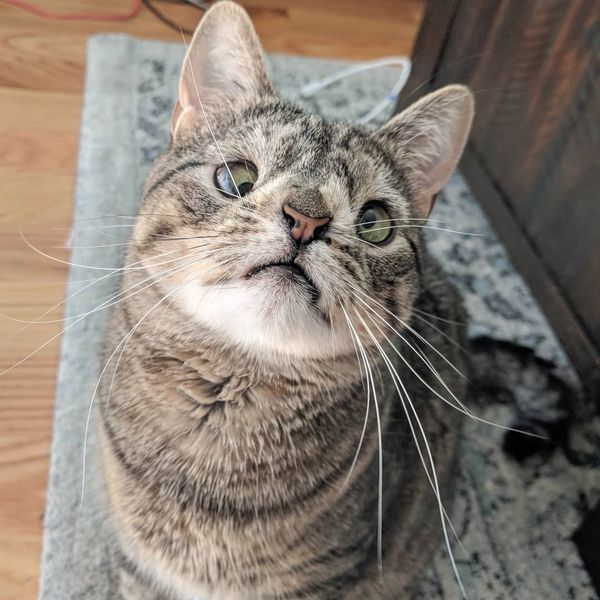 The Bottom Line: Can Cats Get Down Syndrome?

Humans are known to have 23 pairs of chromosomes while cats have 19 pairs. The point here is that Down syndrome happens when an extra chromosome 21 is present. Cats have different chromosomal structure and number, thus making it virtually impossible for cats to have Down syndrome.

Behavioral differences do not also translate automatically to having this condition.  Owners of cats with Down syndrome also complain about behavioral deviations that could range from poor balance, coordination and laziness. However, not all cats with Down syndrome show strange behavior. Even if felines behave in a strange way, it does not mean that they already have Down syndrome. The activities that they are more interested in could only be the cause of their incorrect diagnosis.

The cats reported to have Down syndromes could have been mistakenly diagnosed by veterinarians or doctors in charge of the cat. Cats are known to have genetic disorders like Klinefelter syndrome. Upon reading the reports of the owners of the cats implied to have Down syndrome, the owners seem to have common conclusions which are mostly based on the facial features of the cat. On the other hand, the cases where doctors declared or diagnosed a cat with Down syndrome do not have enough medical facts to really prove that it is Down syndrome. Most of the time, it’s just a doctor’s initial diagnosis.

So, cats can’t actually have Down syndrome. They can have a lot of different physical and behavioral features that are similar to those of humans with Down syndrome, but these don’t necessarily mean your cat has Down syndrome. Your cat could potentially suffer from mental health issues or intellectual disabilities. It might be a bit absent minded most of the time, or fail to respond to you calling it, or be clumsy or even fail to be properly aware of its surroundings. There can be a variety of factors that define all of these things, and they can change from genetic mutations to curable illnesses. However, none of them come from the same kind of condition that causes Down syndrome in humans.

A lot of cats diagnosed with Down syndrome look and act a little different than other cats. The ears can be not as straight and pointy as they should be, or the cat isn’t as alert as you’d expect.

However, always remember that each cat is unique and you shouldn’t expect yours to completely look like the others.