Cats with small legs are super adorable felines that have become extremely popular in recent years. These cats are known as dwarf cats, sausage cats, pygmy cats, and midget cats.

One of the most sought-after breeds is the Munchkin breed that was introduced in the early 90s, but there are other cat breeds with tiny legs or crossed cats with this physical deformity.

In this article, we will consider the history of these cute cats, talk about their appearance and personalities, learn about the genetics behind cats with stubby legs, and the health of short-legged cats. 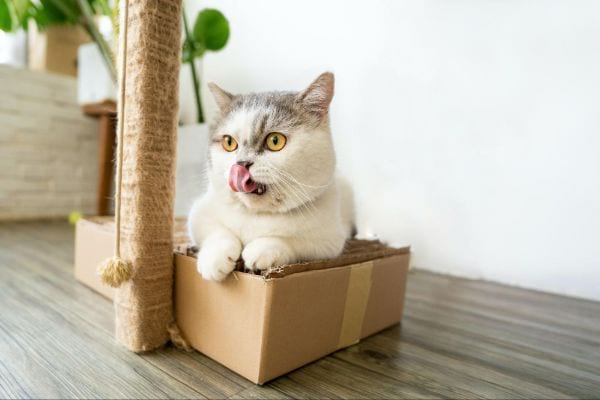 What is a Munchkin? The Munchkin cats were named after the Munchkins in the movie “The Wizard of Oz”. Sometimes these felines are called Sausage cats due to their comparison to Dachshunds, known as Sausage dogs.

These adorable cats were not considered an official breed for many years, and they have a long and interesting history. Thus, in 1944, there were reports about short-legged cats, during the Second World War, there was no mention of these cats.

Later, Munchkin cats were spotted in Russia, and in the 1970s, their mentions appeared in the United States. In 1991, the Munchkin cat was introduced to the public by the International Cat Association (TICA).

There are some concerns that these sweet-looking cats may have mobility issues (one of the Munchkin cat health problems), but there is no proof that their short legs affect their leaping or running abilities. Being outgoing, intelligent, active, and having a sweet Munchkin cat personality, they love being around other pets and family members. They love being handled, so they are perfect lap cats. 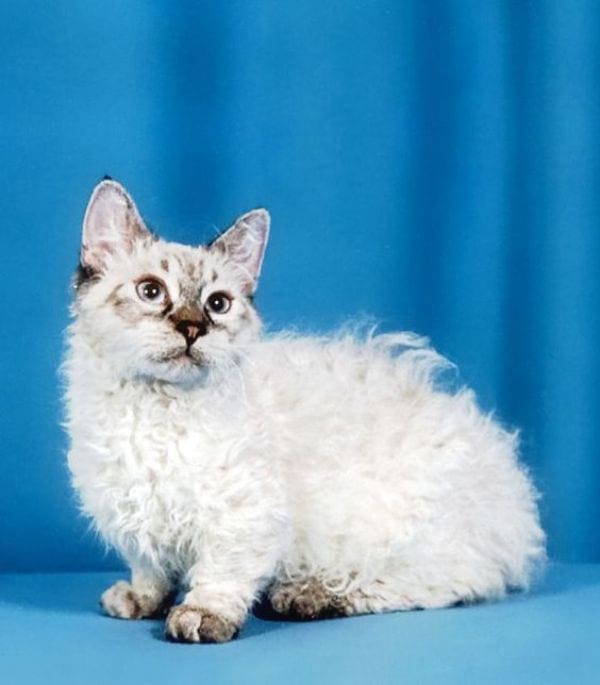 The Lambkin cat is a cross between a Munchkin and a Selkirk Rex. These mini cats with short legs are known as nanus rexes, and in most cases, they have a long, plush curly coat that resembles wool. This is an experimental breed that is not recognized by many cat associations.

These felines have a docile, calm, tender, and cuddly personality. If you need a faithful companion to cuddle with, then the Lambkin cat is your perfect choice. Overall, they have strong health and live up to 14 years, but they are prone to spine and chest deformation issues. 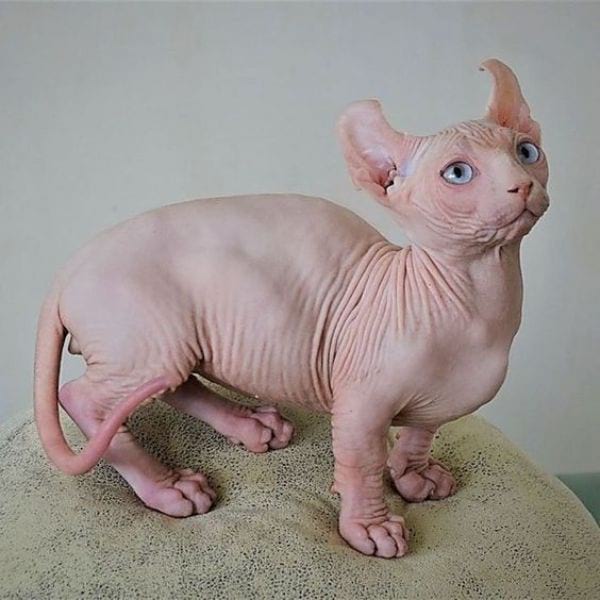 Are you looking for cats that look like aliens? Then go for the Dwelf cat that is a hybrid of the Munchkin, Sphynx, and American Curl. They have curly, elf-like ears, and almost a hairless body.

These unique cats are outgoing and sociable, they are playful and love spending time around family members. Therefore, they are referred to as cats with dog-like personalities. They have strong health but may have some skeletal issues (a curvature of the spine) or heart/lung issues. The Napoleon, or the Minuet cat breed, was created in 1996 by Joseph Smith by crossing Persian and Munchkin cats. As a result, we have a cute feline with a long coat, round eyes, and a round face. These felines come in various colors.

These cuties have a cheerful personality, they love to spend time with humans and other pets. They hate being lonely, so families with kids, people who spend much time at home, or those people who are ready to share their adventures with the Napoleon cat, should become parents of these cats.

The Minuet cats are overall healthy, but they may suffer from polycystic kidney disease that has been passed from their Persian ancestors. 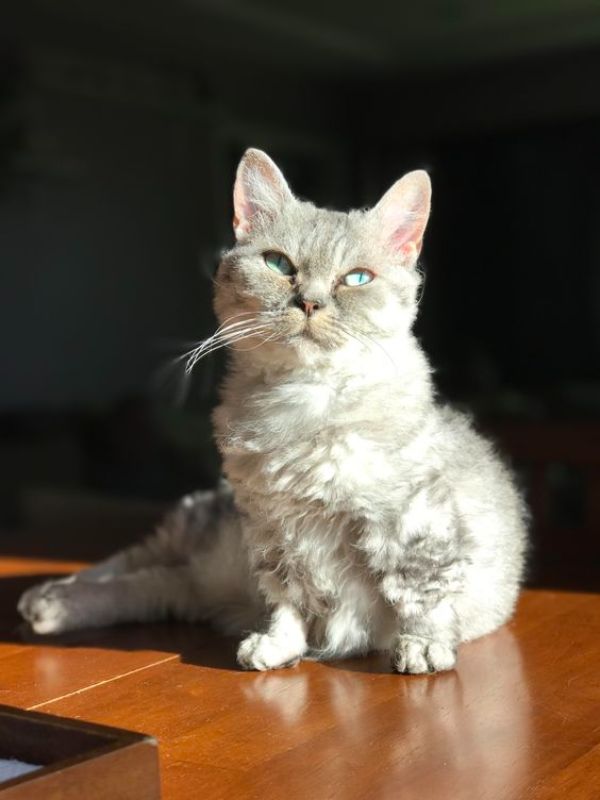 Skookum cats are a hybrid of the Munchkin and LaPerm breeds. The name of this tiny cat breed comes from the Native American language and means “powerful”.

They are distinguished by their slightly curly coat (it can be either short or long), a long and plumed tail, large ears, short legs, and various colors and patterns. This breed is intelligent, affectionate, playful, so a catch and hide game is a perfect option for them.

Besides, they have a sweet and loving temperament which makes them a perfect match for big families. This relatively new cat breed with very short legs was developed in Boston in 1998. Minskins are a hybrid of the Devon Rex, Burmese, Sphynx, and Munchkin. This extraordinary mixture manifests itself both in the cat’s appearance and in his character.

They amaze people with their cute short legs, a unique coat (it can be hairless, fully coated, or feature hair points), and a long tail. Regardless of the coat type, they require weekly grooming – weekly brushing or bathing to keep their skin dust- and oil-free.

These miniature cats have a strong immune system and rarely suffer from serious problems. As for the nature of cats, they are playful, friendly, funny, and enjoy interacting with people and other animals. 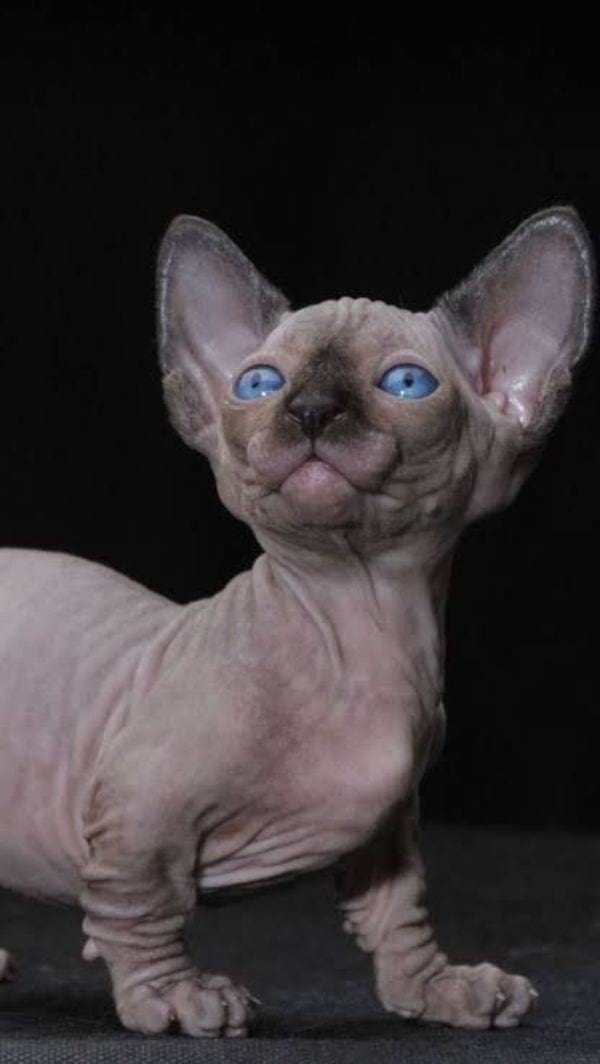 Being a hybrid of the Sphynx and Munchkin cats, these dudes possess the best qualities of each lineage but also have some unique traits that make them one of a kind. These cute feline friends adore jumping everywhere, running, and they become fearless heroes when it comes to climbing.

Besides, their unique personality perfectly matches their great appearance. These cats weigh between 5 and 9 pounds, and their height is 7-8 inches. They have beautiful blue eyes, lynx-tipped ears, and a soft hairless coat that feels like a soft peach.

Their skin can be white, cream, brown, or have other colors. As for their health, they tend to be healthy, and on average, they live 15 years.

Bambino cats are friendly, affectionate, and great with children and other pets. Therefore, they are a great choice for families. 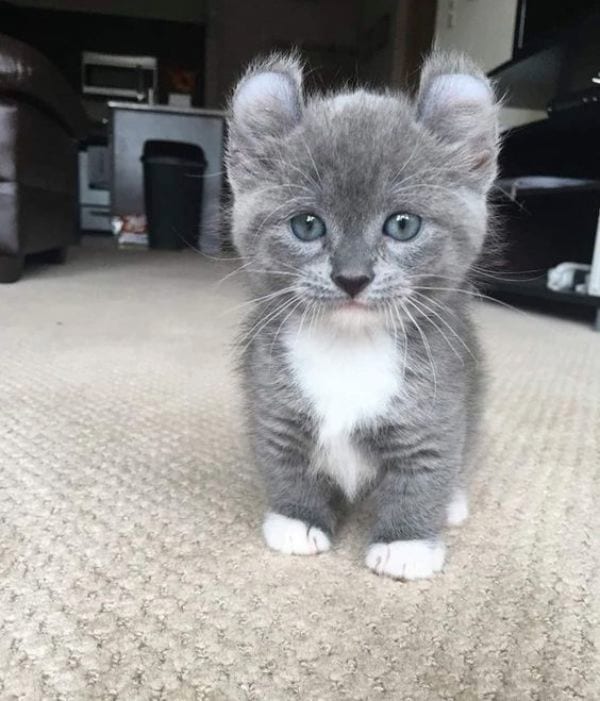 The Kinkalow cat is one of the rarest Munchkin hybrids (this is a mix of a Dwarf Munchkin and an American Curl). This is one of the few dwarf cats that is recognized as a breed by The Dwarf Cat Association.

This feline looks super cute thanks to up-turned curled ears and short legs. Kinkalows can reach a height of 7-8 inches and weigh 3-7 pounds. Kinkalow kittens can be short-haired and long-haired, have green, yellow, or brown eyes, and they come in various colors (black, gray, orange, and cream) and patterns (tabby, tortoiseshell, calico).

These super energetic felines love climbing, running, and chasing toys. They will be great play companions for kids. Besides, they are known for being extremely affectionate and dog-like cats who follow their owners everywhere. 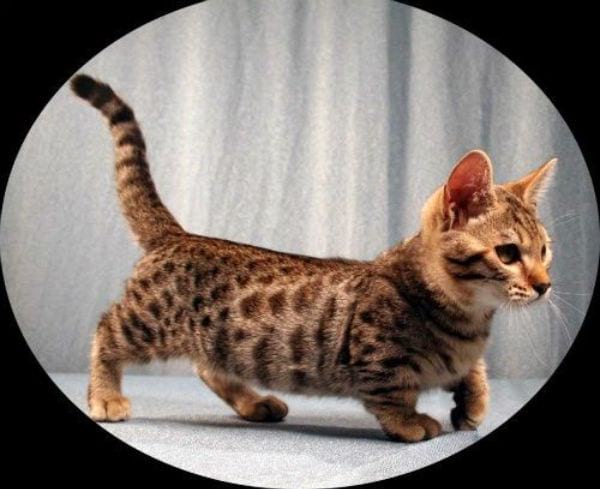 This is a relatively new cat breed – it was developed in 2006 by Shannon Kiley. The Genetta cats are overall healthy, and they live up to 12 years.

These unique cats are a cross between Savannah, Bengal, and Munchkin cat breeds, so they have adorable short legs, and can have beautiful exotic coat patterns (marbled, spotted, or rosette coat patterns) and various colors (black, brown, or silver).

In terms of appearance, this feline is similar to a wild African Genet, but it has a playful, energetic, friendly, loving, and intelligent personality. Genetta cats are always up to playing active games and spending time with their owners.

Why Do Some Cats Have Short Legs?

“Some cats are known as munchkin cats. These cats have very short front legs. This is caused by a cat having a copy of a gene for their front legs to be short. This is a dominant trait meaning that they only need one copy of this gene to have short legs,” says Sara Ochoa, DVM.

Genetics of the Munchkin Cat

Munchkin’s short legs are the result of hypochondroplasia or pseudoachondroplasia. These diseases are characterized by impaired formation of cartilage and certain types of bones, leading to dwarfism.

This means that the body grows, and the growth of the limbs is delayed, that is why the cat’s legs become out of proportion to the body. The munchkin gene is autosomal dominant. Homozygous embryos with the Munchkin gene are not viable, only heterozygous Munchkin kittens are viable.

Since only heterozygous Munchkin cats are able to transmit this gene, all cats with at least one short-legged Munchkin parent can have kittens with phenotypes: short-legged or normal legs with genotypes Mm or mm, where M is a sign of short legs, and m is a sign of long legs.

The Manichkin gene is dominant, which means that it overlaps the normal leg length gene, so the offspring to which this gene is passed will have short legs.

Kittens that have received the munchkin gene from another parent are simply adorable, as they also have a unique gene from the other parent. For example, Scottish Fold cats have the Fd gene. So, the kittens get a copy of the M gene and the Fd gene, so they have folded ears and short legs, that is why these felines look incredibly cute.

There are other reasons why cats may have short legs. Below, we will look at the main ones.

Random mutations are not associated with the munchkin gene, they occur quite rarely, and often kittens die in the womb or are born dead.

This type of dwarfism affects the function of the pituitary gland (this gland produces growth hormone), so these cat breeds stay small.

This condition is associated with the fact that the thyroid gland does not develop properly, that is why midget cats have stunted growth, larger heads, and smaller limbs. Also, these kittens have poor mental development.

Poor nutrition can affect the growth of kittens, which is why they suffer from growth retardation of the limbs.

The Health of Cats With Short Legs

Do short legged cats have health problems? Many short-legged cats can live long and normal lives, however, they are more prone to joint issues than other breeds. Below, we will consider the most common health issues cats with short legs encounter.

Sara Ochoa, DVM, explains, “Their short legs usually cause an abnormal stance and posture which can lead to joint issues and arthritis.”

Cats with short legs can suffer from lordosis and scoliosis. Sara Ochoa, DVM, Veterinary advisor for doglab.com explains, “Lordosis is caused from the spine dipping downward putting pressure on their heart and lungs. This can sometimes be fatal as your kitten starts to mature.”

Sara Ochoa, DVM, says, “These breeds are known to have Pectus Excavatum where their sternum bone will sink in. This can cause the organ to have to squish together in this area.”

Short-legged cats have a distinctive waddle that makes them look super cute. Some cat experts think that this distinctive feature makes their lives less fulfilling, but there is no scientific evidence that proves this point.

Thus, due to their short legs, these cats may have some issues connected with joints, but this distinctive characteristic does not prevent them from being loving, cheerful, loyal, and kind companions for their owners.