If you have long dreamed of a living teddy bear that will delight you with a loyal nature, immense tenderness, love, and wonderful purring, then the British Shorthair cat with round cheeks and beautiful eyes is a dream that has come true. These cats are peaceful, affectionate, intelligent, and playful, they will be a great addition to any family.

When you think of British Shorthair cats (BSH), the first thing that comes to mind is a large cat with short, thick blue hair and large amber eyes. However, there are many variations of colors and patterns of these cats, including such colors as smoky, chocolate, lilac, and fawn.

Below, we will take a look at the different color combinations of these cats so that you can more easily decide on the color of your new pet.

The origins of the British Shorthair most likely date back to the first century AD, making it one of the most ancient identifiable cat breeds in the world. Many people mistakenly believe that the birthplace of British Shorthair cats is Great Britain, but the history of these beauties is really captivating.

There are several versions of the origin of the British Shorthair breed. According to one of them, the history of the BSH cat is connected with the history of the conquest of Britain by Rome. Supposedly, the Romans brought with them Egyptian cats, which eventually adapted to a new habitat, acquired thick hair with excellent protective properties, and, thanks to their unsurpassed hunting talent, became valuable domestic pets.

The first officially recognized representative of the breed was a white cat, and this happened in London in 1889. During the Second World War, the British breed was practically destroyed, and after the war, breeders combined their efforts and restored it.

People assume that the difficult period of near extinction was overcome thanks to the efforts of various breeders, including Keith Wilson. As for the life of this breed in America, they appeared in the land of the free in 1901 but were recognized as an independent breed only in 1980.

British Shorthair cats are peaceful and affectionate. However, they are not as tame as Ragdolls and prefer to sit next to a loved owner rather than lie on his lap. The term “British Restraint” is definitely about them. These bewhiskered buddies are very calm and patient, get along well with children and animals. Besides, they are playful but not hyperactive.

A solid color of the coat means that on the cat’s coat, there are no spots, stripes, or other patterns. The classic colors are blue and lilac, the rarer ones are chocolate and cream, and the rarest shades are fawn and brown. We’ll take a closer look at these colors below. 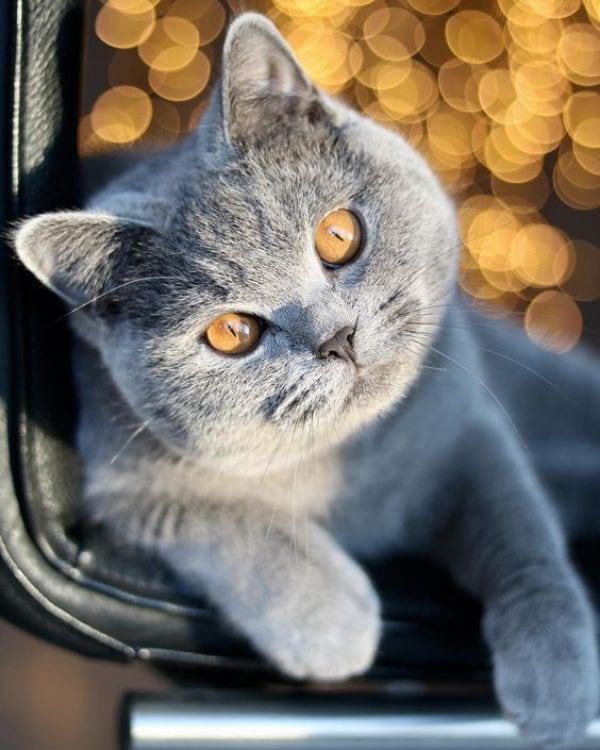 This is the classic color, which has become the calling card of the breed. This color combines blue and gray shades and looks great. The undercoat may be lighter, but there should be no patterns and white spots. In addition to the blue coat, these cats have blue skin on the nose and paw pads. Their eyes are large and amber in color. 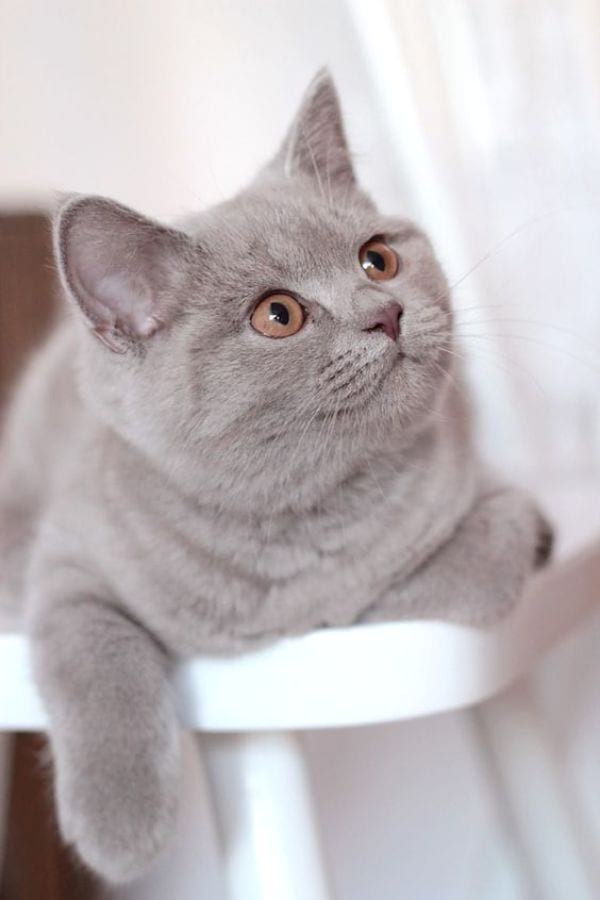 This amazing color cannot be bred deliberately, since no gene is responsible for a lilac coat color, so this shade is one of the unusual cat colors and therefore so attractive for many cat parents.

The lilac color combines several shades: pink and blue. Newborn kittens have a more pinkish coat color, while adults have a blue coat. Lilac kittens’ undercoat should be slightly lighter than the main color, the nose and paw pads should also be lilac. The eyes are either amber or copper. 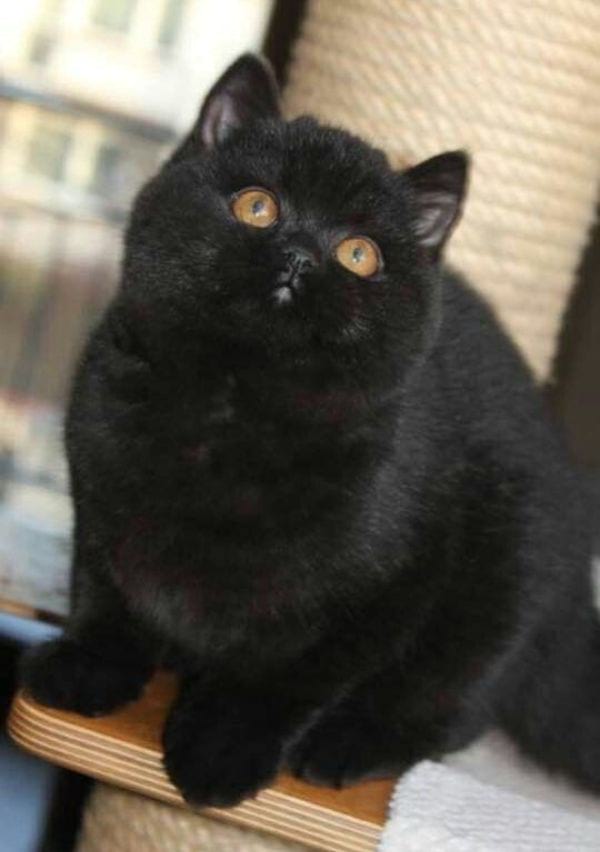 Such a pet has a charcoal color on the skin, undercoat, and coat. This color is considered the rarest because often black kittens change color to brown or chocolate as they get older, so breeders need to make an effort to breed a black kitten. 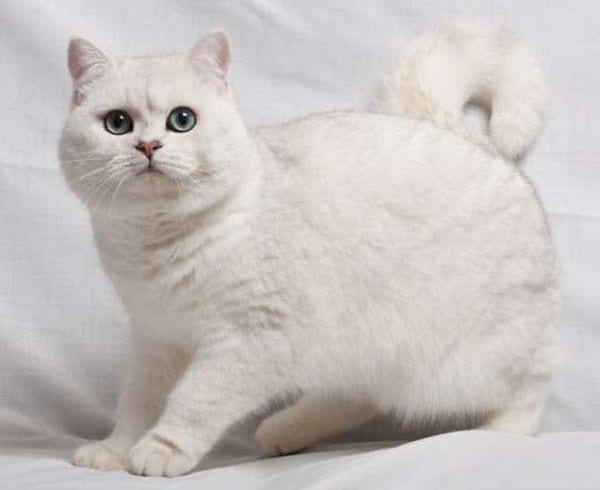 Snow-white beauties with light pink skin on the nose and paw pads will definitely win your heart. Their coat is cold white, any yellowing on the coat is unacceptable.

If there is any pigmentation, then a cat of this breed is not considered monochromatic. As for the eyes, they can be multicolored, aquamarine, or blue. 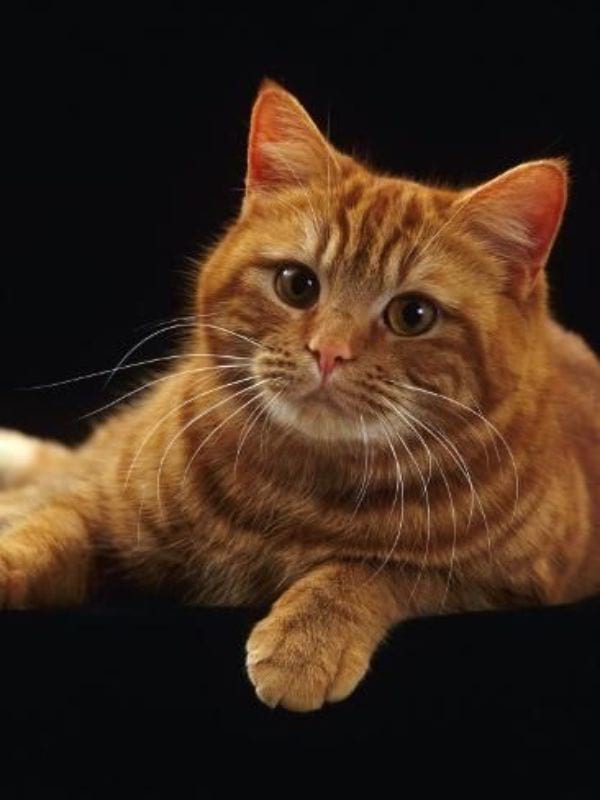 Everyone knows the handsome cartoon character Garfield and his beautiful coat color. The British Shorthair cat can be of the same bright shade, which is simply impossible to pass by.

Fire kittens are rarely monochromatic, most often they have stripes on their paws and forehead, and the shade of the coat is a mixture of red and orange. The eyes of these cats are copper or orange, and the nose and paw pads have a red tint. 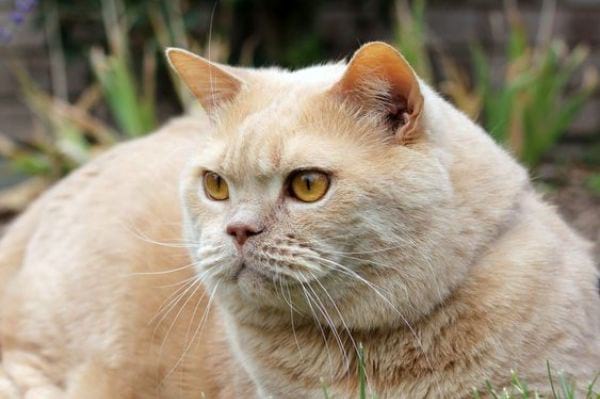 These cats have a gene responsible for a white shade, so their coat is light red, and their undercoat is pale white. Against the backdrop of light fur, their huge eyes, which shine in gold, orange, or copper, look especially stunning.

These cuddle babies can also have a striped pattern on their fur (also known as freckles), which makes them look super cute.
The nose and paws of a light pink color complete the look of a cute and affectionate kitten. 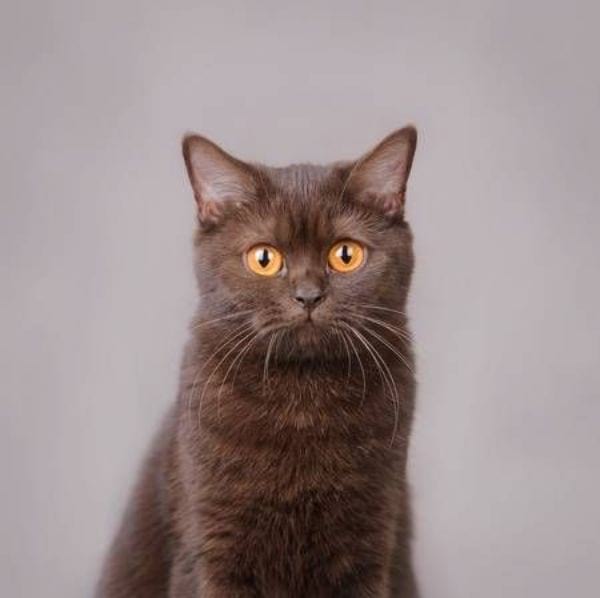 This shade is also known as “Havana”. These cute Brown British Shorthair kittens were born as a result of crossing with brown Persian cats, so they have a deep uniform color of the coat.

Adult kittens tend to have a rich brown color, which can be either dark in color or the color of milk chocolate. It is believed that the deeper this color, the more elite such a pet.

Besides, areas or hairs of a different color are not acceptable. Chocolate kittens look absolutely adorable with big orange or copper eyes, and pink or chocolate-colored nose and paw pads make the kitten look even more astonishing. 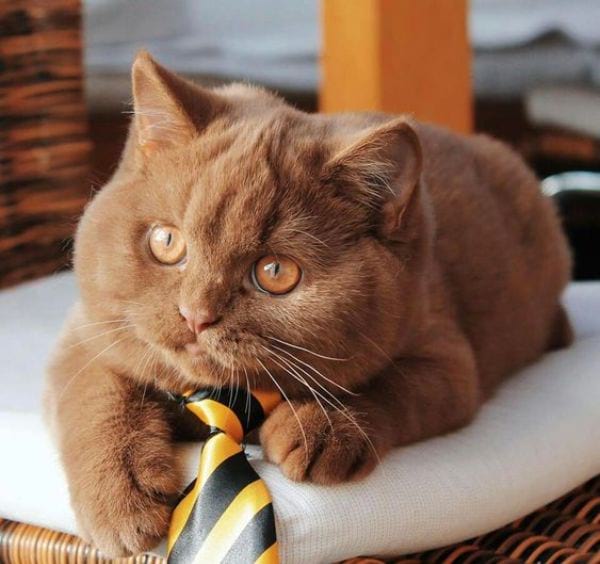 Such a handsome kitten is extremely rare. These kittens got their unique cinnamon cat color from chocolate British cats who carry this gene. The color of the fur of these kittens is lighter than the chocolate color, therefore, they are called “cinnamon”. The eyes of these felines are orange or amber in color, and the nose and paw pads can be either brown or pink. 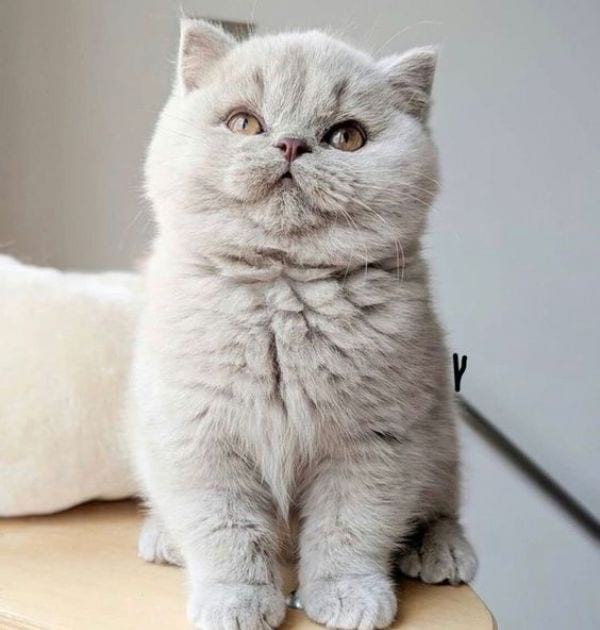 The fawn cat color is very rare and is often confused with other colors. Most of all, this shade is similar to the color of a newborn fawn – soft cream with pink.

The color of the nose and paw pads are pinkish-fawn and blends beautifully with the coat color. Since it is very rare to meet such a cat, buying this feline is of great value.

It is highly likely to buy a cream-colored pet instead of a fawn cat, since the DNA analysis is carried out to establish the reliability of this color, and a special document is issued. If the breeder does not have this document, then it is not reliable. 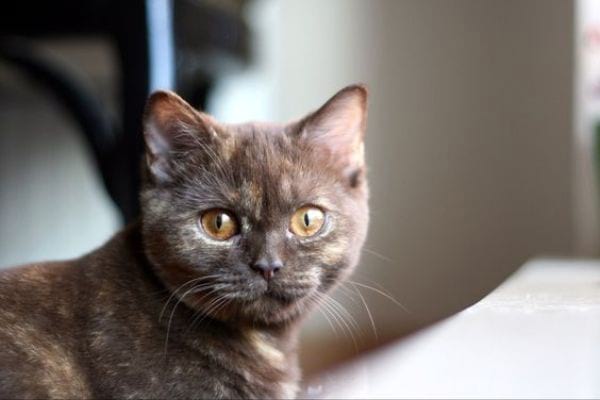 This unique color is a combination of spots with a mosaic pattern, where one of the colors of an intense shade (black, chocolate, brown), combined with red, or a diluted shade (blue, lilac) combined with cream is presented. There is no tortoiseshell gene, the X chromosome is responsible for this pattern. Only female cats can be torties because females have two X chromosomes, tortoiseshell British Shorthair cats have two sets of genetic information that can determine their coat color.
These furry beauties can be chocolate or black or have a cream body with a bluish or purple tint. 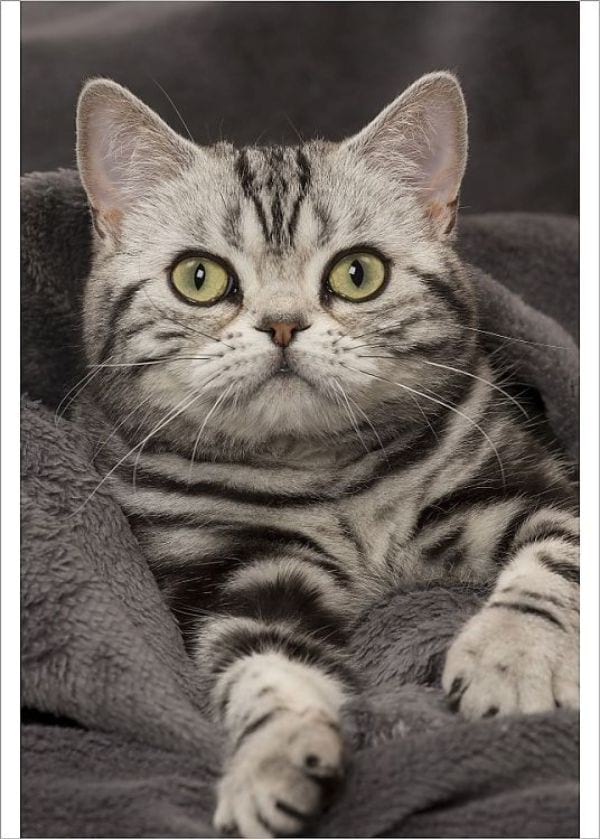 A distinctive feature of this pattern is the letter “M” on the forehead. On the body, there are colored stripes, which are also located on the ears; on the tail and paws, there are narrower stripes. Regardless of their location, these markings are dense and well-defined; white spots or white hairs are unacceptable.
BSH cats can have the main three tabby colors: Classic tabby, Mackerel tabby, and Spotted tabby.

This color is a sign of incomplete albinism and implies the presence of contrasting areas on the feline’s body. This coloration is similar to Siamese, as the moggy has the cs gene.

Due to this gene, pigmentation occurs only in cold areas of the body. This means that the face, tail, legs, and ears of the BSH are darker because the temperature in these areas is the lowest. The eyes of these bewhiskered companions usually have various shades of blue.

Pets feature a light beige body and dark points without any pattern. The nose and paw pads are the same shade as the points, and the boundary between the base color and the markings should be clear. There are several types of solid colorpoint patterns.

The body color is beige or light cream, spots are red or cream. The nose and feet are the same shade as the points.

The undercoat is white, the base color is also light, and the markings have light shadow stripes.

In chinchilla BSH cats, the color of the tips of the hairs is very light in comparison with the points, and the eyes are blue.

This color looks astonishing because it has a pale coat of one of the main colors in combination with a silvery undercoat. This mix definitely looks mesmerizing! 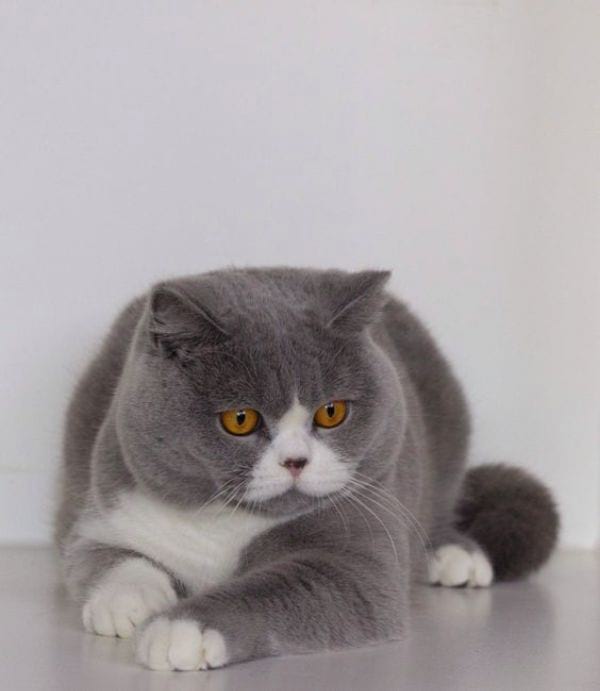 There are several colors mixed with white, these include bi-color cats, calicos, mitted, van, and harlequin.

Bi-color cats feature two main colors: black, blue, purple, and white. British Shorthair black and white cats are pretty common.
About half of the total color of the feline should be white.

On the head of the cat, there should be a white triangle with clear boundaries, the chest, paws, and abdomen should also be white, and the main color should be present on the back and head. The border between these two hues must be clear, and the presence of white on the base color is not allowed.

The Van color means that a feline has a white body and a few white spots on the head. The ears must be white, and the tail must be completely colored.

Harlequin is similar to the Van color, but the difference is that the colored areas are located not only on the head and tail but also on the back and paws.

The Mitted color is not recognized by the standard for the color of cats. Mitted cats have small white areas, and the white color is located on the belly, chest, and neck. Besides, there are “mittens” on their paws that make them extra cute.

Calico British Shorthair cats have three main colors, including white. These colors do not intersect and have clear boundaries.

The cat is one of the most magical animals on earth. British Shorthair kittens come in a wide variety of colors. Some people believe that a cat’s color can have a profound effect on people and even change their fate. Below, we will look at the main colors of British cats and consider their meanings.

What is the rarest cat color of British Shorthair?

British Shorthair cats can feature various unusual colors, such as chocolate and red. But the rarest colors are cinnamon and fawn.

Do British Shorthairs have stripes?

As you can see, British Shorthair cats have a variety of colors and patterns that make them super attractive. You can choose a kitty of any color and be sure that you’ll become a parent to a cute, affectionate, sweet, and playful feline.