When do Cats Stop Growing?

If you wanna know everything about the first year of your cat’s life, you’ve come to the right place. We’ll tell you everything we know!

You can’t deny that the first 12 months of your cat’s life are very cute and really adorable. You know, all those Facebook photos, nice short videos, etc. It’s the time when your cat is in its cutest period, and all those moments are really priceless. That’s what we all know.

But there is another thing you must know: this time is not only the cutest but also the most important time. These months are literally vital for every cat — but, unfortunately, lots of people don’t know anything about it.

Well, we are here to tell you everything about the first months of your cat’s life. And we’ll begin with one of the most common questions of any cat owner. It sounds like this: “When are kittens fully grown?”

When Are Cats Full Grown? What Should You Know About the First Months of Life? 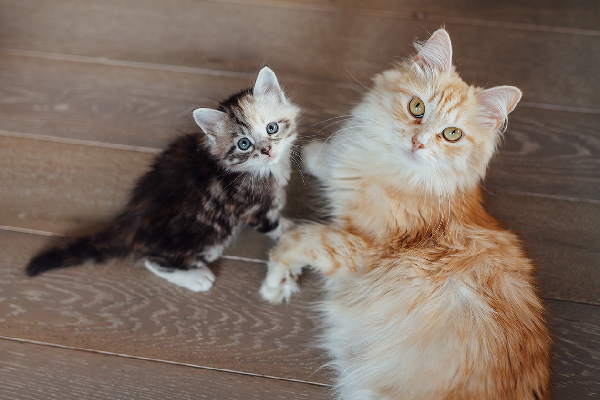 Here we’ll talk about the kitten growth stages. There are a few cat life stages you should know about. The first common thought is that there are two stages of the kitten’s development to an adult cat: both these stages take up to 6 months, so the answer to the “when is a cat an adult?” question sounds like “one year”. In the majority of cases, the cat becomes fully grown after 1 year… but despite it’s a very common thought, it’s only one thought. Like, lots of people believe that the cat’s development process can take up to 2 years.

They say that there are actually six stages of a cat’s life.

When Do Kittens Stop Growing? The Life Cycle of Cats: from Kittens to Seniors 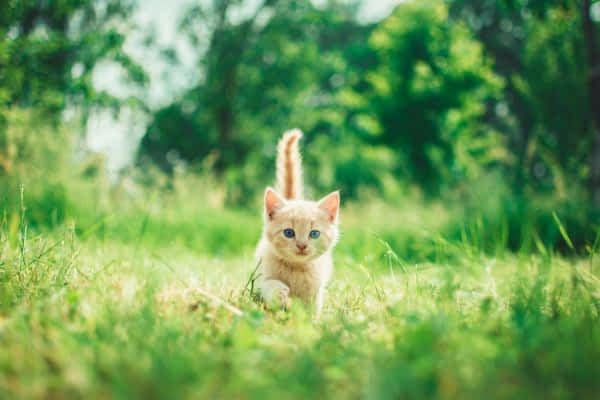 Cat’s life stages are kitten, junior, prime, mature, senior, and geriatric. The first stage takes 6 months and begins from the first day of your cat’s life. During this stage, the cat hasn’t reached his maturity yet, and it’s not sexually active yet. The majority of cats don’t show any signs of puberty during this stage… well, except for some breeds.

According to these experts, the second life stage is when your cat is not a kitten anymore, and this stage is somewhere between 6 months and 2 years. Like, the cat isn’t at its prime yet and it isn’t a grown cat during these months, but it reaches the full size and learns everything it needs about life and about the environment. After the first 2 years, the prime stage begins, and it lasts until the sixth year of your cat’s life. But well, that’s not what we are going to talk about here.

So, there are two answers to the question “when is a cat full grown?”. The first is “after 1 year”, and the second is “after 2 years of life”. We believe that both these thoughts have the right to exist, but we are also inclined towards the first option. The thing is, the majority of experts and cat owners agree that there are only four kitten growth stages, and that when the last one ends (it happens after 12 months of life), the cat can be considered a full-grown cat.

According to them, the first 2 months are the first stage. We said that the first year is vital, and these two months are even more important — but you shouldn’t worry about it, because your kitten will most likely spend this time with the mother. The only thing you have to do during these 8 weeks is the vaccination: thus, there are some core cat vaccines (like rabies, panleukopenia, and herpesvirus vaccines) that must be done during the first 8 weeks. We highly recommend you to consult with a vet in order not to miss anything. The good news is: the kitten will not need any additional nutrition during this time — only the mother’s milk.

As for the third stage, well, it lasts from the 4 to the 6th month of your kitten’s life. It’s the time of big changes — during these months your cat’s baby teeth will fall out, its behavior will change and its body will continue developing. Yes, lots of cats look like adult cats when they are 6 months old, but they are still teenagers, so you’ll have to take care of them. You’ll definitely need patience at this stage because, as you know, teenagers can be trouble, and it’s not only about people.

The last stage lasts from the sixth to the twelfth month of your cat’s life. After that, you can’t call your pet a kitten anymore — congratulations, it’s a cat now! By this time, the absolute majority of the cats reach their physical majority. However, not all of them.

Does Cat Breed Make a Difference? Does Gender Play a Role?

That’s what we’d like to talk about here. If you ask “when does a kitten become a cat?”, the vast majority of people will say “after 12 months”, but that’s not an exhaustive answer.

Like, some of the cats are fully grown at their 12 months, while the others need 18 months or even 48 months! What is it?

The thing is, the answer to the question “at what age are cats full grown?” depends on several factors. Like, the gender of the cat — female felines are usually smaller, shorter and they weigh less in the majority of cases. It makes sense that female cats grow a little faster than male felines — but it’s not only about gender, of course.

Thus, when people ask when does a cat stop growing, they do usually mean a particular cat breed.  And here it’s getting interesting, because the breed of your cat doesn’t just affect the size and weight of your cat, but also influences how long does it take for a cat to be full grown.

Ok, let’s finally say it: lots of cats do actually continue growing until 18 months! This growth isn’t as rapid as the growth in the first 4 stages, it’s much slower, but it’s still growth. The bigger the breed is, the longer the process of growth is.

But, well, that’s not all. If you have a Maine Coon cat, we have two things to say. First of all, you are really a brave person if you’ve decided to share your house with this 15-25 pounds cutie. It’s an extremely brave decision!

The last thing we wanna tell you is: Maine Coon cats don’t reach full size in 12 months. What’s more, they don’t reach it even after 18 months — no, the growth of such cats can take up to 4 years!

When Is a Cat Full Grown? How Big Will My Cat Get? So, we are finally done with the question “What age do cats stop growing?” 12 months, 18 months, and 48 months (if we are talking about Maine Coons) are the right answers to the questions like when do cats reach full size. That’s what you were looking for, right?

But there is another common question, and it sounds like this: how big will my cat get?

The simplest answer here is “we don’t know”. Seriously, all cats are different. However, we can predict the size, the height and the length of your cat based on your answers to three questions. Here they are.

It makes sense that if you have a male neutered Maine Coon, he will grow to enormous size — like, 25 pounds or even more! If it’s a Savannah cat, he can grow up to 15 pounds in weight. If it’s a female Munchkin, she will never weigh more than 6-8 pounds, even if she’s neutered. You get the idea? The breed is one of the most important factors that can influence the size of your cat, but gender and sterilization are important, too (neutered cats are usually larger).

The Bottom Line on “When Do Cats Stop Growing?”

Alright, let’s sum it up. There are four stages of the cat’s rapid growth, and the last stage ends at the twelfth month (we’ve listed these stages in the cat growth chart in the first paragraph). The majority of kittens stop rapid growing when they are 12 months old, but this growth continues until their 18 months. However, if it’s a big cat, like a Maine Coon, it may take up to 4 years for this cat to become an adult. During this time, your cat will need vaccination, veterinary care, and diet. As well as your attention and love, of course.

P.S. We recommend not to dwell on all this stuff too much. The thing is, all those stages are quite general, and figuring out when your particular cat will be grown is not the easiest task in the world. Each cat is unique, they all are different — and if you wanna know more about your cat, you should ask your vet.