Every shade of cat coat is magnificent in its own peculiar way, but there is something special about a tender, grey fur that seems so lovely and a bit mysterious.

There are three main grey cat breeds, and many types of these breeds so it won’t be difficult for you to choose a new grey favorite that will enrich your life. These felines can vary from short-, medium- and long-haired types of grey cats.

Besides, all types of grey cats feature a specific color of the eyes, face shape, and a lot more peculiarities related to appearance. But don’t forget that the main differences between patterned and solid grey cats lie inside these stunning creatures.

When it comes to the grey cat temperament, it is possible to say with confidence that grey felines or blue cats (as they are often called) are considered as having a fun-loving and naughty personality.

These cats are extremely beautiful and their owners tend to forgive them for their mischievous behavior. In turn, blue grey cat breeds are great four-legged companions who get along well with children and they are characterized as being easy-going and highly loyal to the owner. 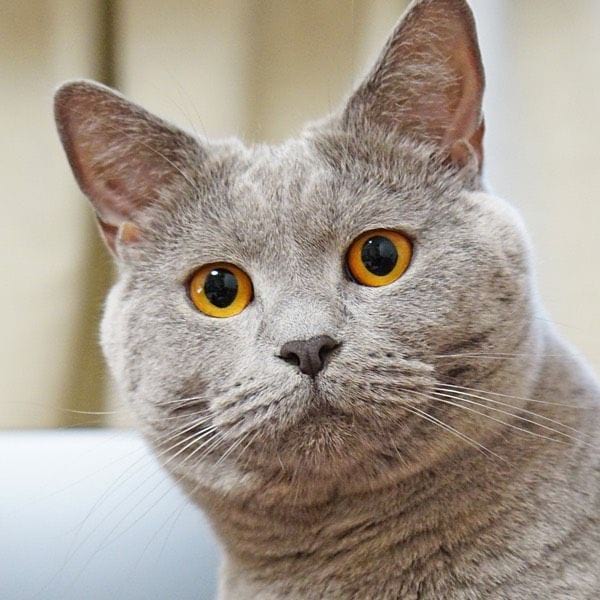 One of the most sought-after medium-haired cats of grey is the Chartreux. Having a muscular strong body and thin legs, this cat type belongs to excellent hunters.

The Chartreux cats impress people with their gorgeous look. They have an amazing wooly grey coat and gold, copper, or orange eyes. This grey cat breed is known as one of the oldest. It was born in the 18th century near Paris thanks to the Carthusian monks.

The Chartreux can be a great domestic pet as it usually builds strong bonds with its owners and has a dog-like personality. This cat is very devoted to pet owners and can learn new tricks quickly. 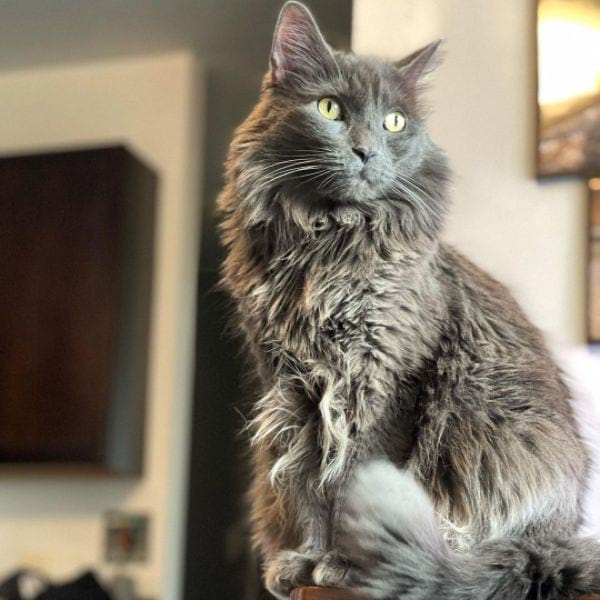 The Nebelung (also known as “the creature of the mist” if we translate this word from German) is a long-haired grey cat (long-coat version of the Russian Blue).

The Nebelung coat shines silvery shades and seems a slightly bluish-grey color. This is a grey fluffy cat that can be characterized as a gentle, calm, and quiet creature. Sometimes people state that the Nebelung relates to the shiest fluffy cat breeds.

However, this cat type is extremely playful despite its modesty. Such a versatile feline necessarily needs a high cat tree and a lot of climbing spots to sharpen its claws. 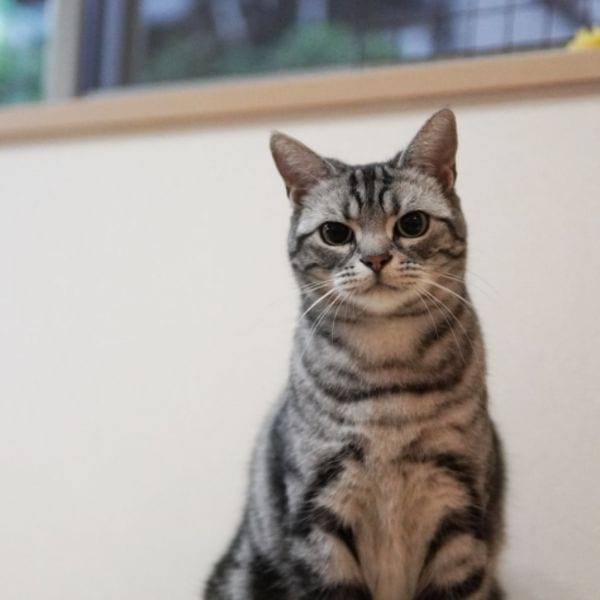 But at the same time, they don’t like too much attention towards them and so they are suitable for busy pet parents. 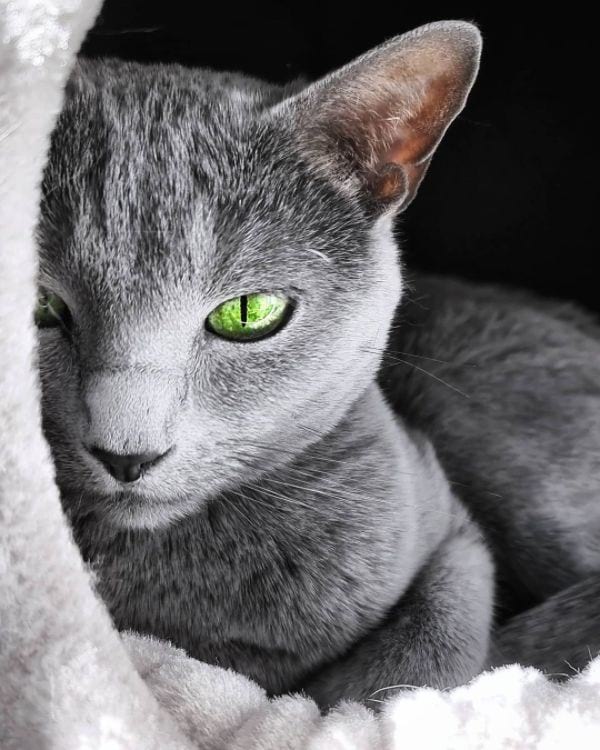 One of the most famous, most popular, and most demanded breeds of grey kittens and adult cats is the Russian Grey cat or Russian Blue.

Its stunning dark grey coat with a tender silver hue and attractive green eyes can leave no one indifferent to this particular cat breed. Despite the coat of the Russian Blue cats that is plush and dense, these cats are known as hypoallergenic ones.

This makes them perfectly suitable for people with allergies to cat hair. Among the beautiful cat breeds, the Russian Blue felines are distinguished by their love for a quieter lifestyle and devotion to their owners. 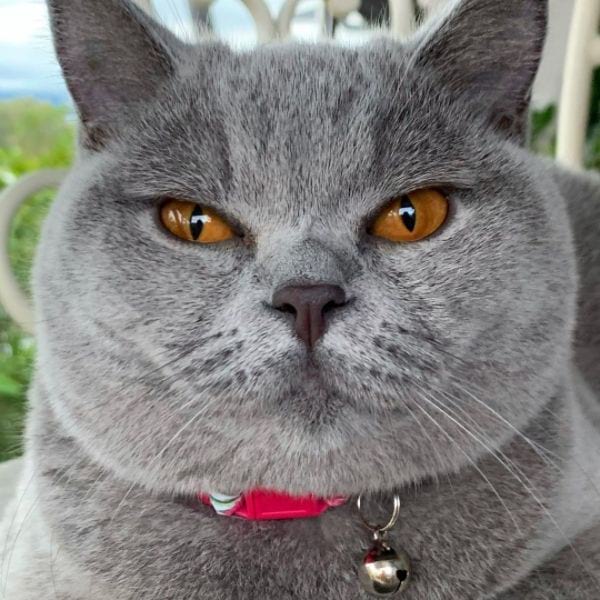 Grey is the most favorite color of the British people. So it is not surprising that the most popular cat breed in the UK is the grey British Shorthair cat.

This is a bit of a cobbier version of the American large grey cat because they have a rather similar appearance. However, there is a great difference in their characters. The British Shorthairs are famous for their passion for relaxation.

They are highly laid-back creatures, but like their American cousins, the British Shorthairs tend to be independent and loyal. 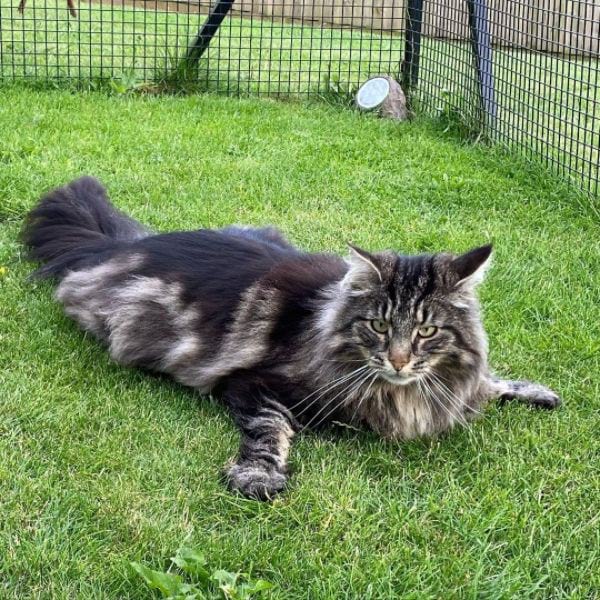 Originated in North Europe, the Norwegian Forest cat is considered one of the largest cat breeds that are well-suited to cold weather conditions. The Norwegian Forests of grey color aren’t an exception. The cats with such charming fur shade are very sought after among cat lovers worldwide. The grey kittens and mature cats are very active and energetic. They are brilliant hunters and passionate climbers. 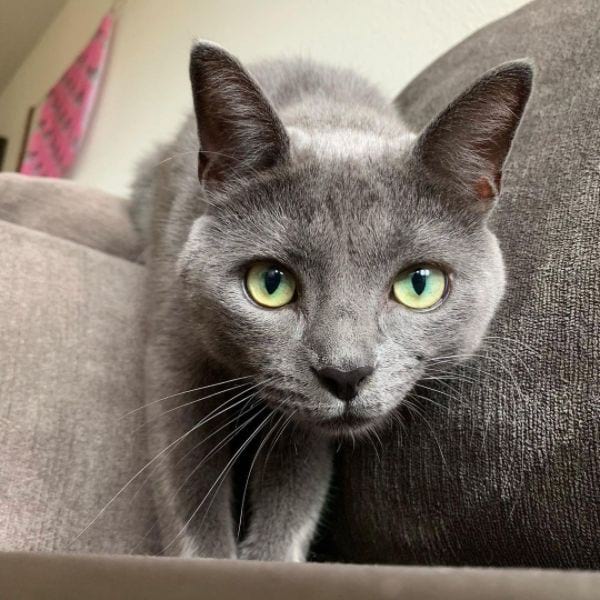 Such a light grey cat breed can rather be met in the USA because the Korat is known as a specific Thai cat breed. Actually, it is also one of the oldest cat breeds that we can see nowadays.

The Korat coat features blue-grey hues with light silver tips. This grey cat with green eyes can impress everyone with its calm and quiet temperament as well as its affectionate attitude towards the pet owners.

But it is quite normal that the Korat cat can shy away from strangers. 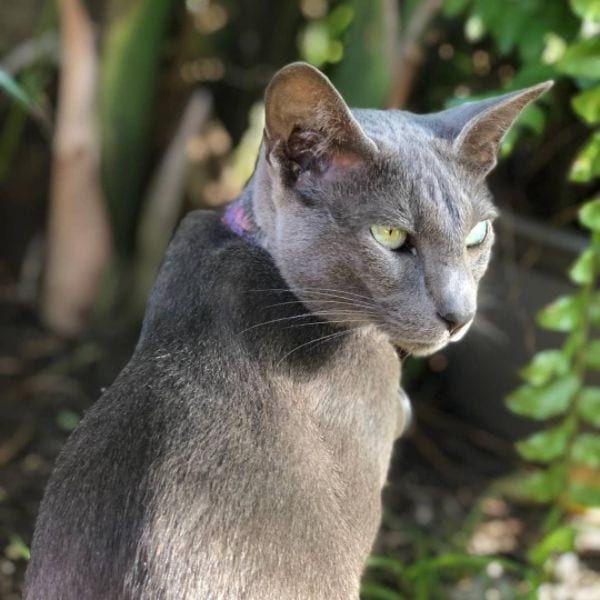 As a relative of the Siamese cats, the Orientals come in different colors, but extremely popular are the Oriental grey cats. Their body build and temperament are quite similar to the Siamese.

They are famous for their smartness and active lifestyle. They are more likely to build a strong bond just with one person from the whole family unlike the rest types of cats. 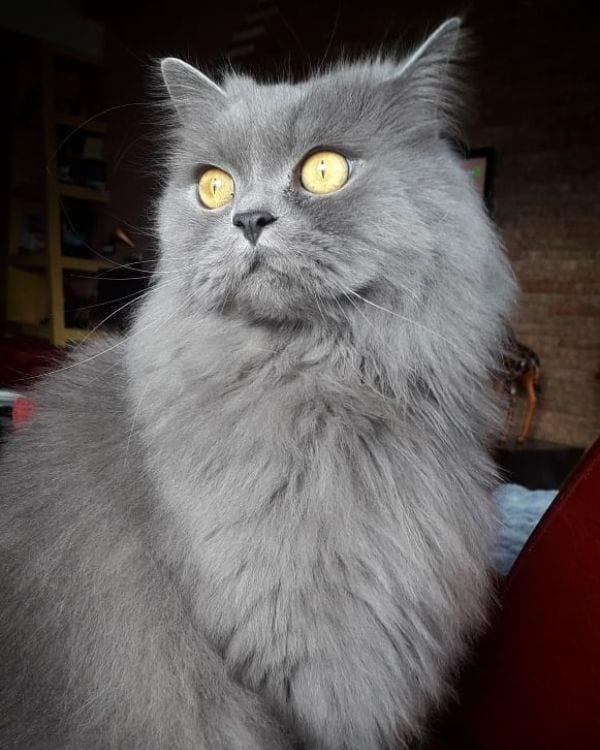 These long-haired fluffy cats known as the Persians require constant grooming. Their pretty and shining grey fur needs to be combed several times a week. Some cats expect to be groomed every day.

So this cat type loves to be the center of human’s attention and they usually spend the day relaxing on the cat mat. 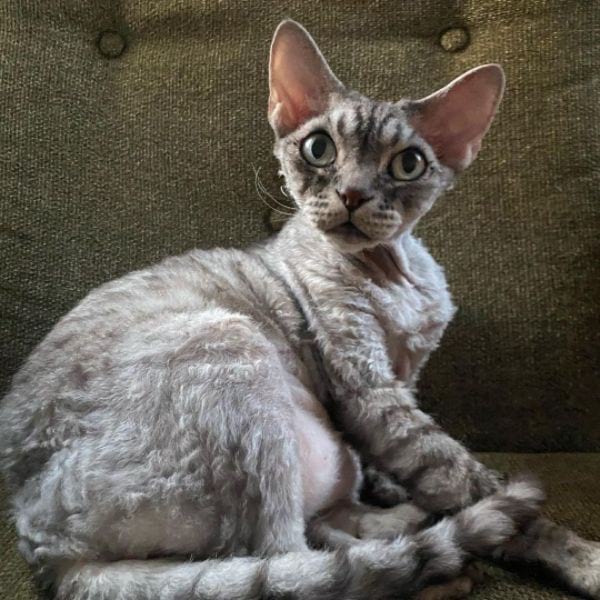 If you’re looking for the best gray cat names, Elf or Elfy will be great for any Devon Rex kitten. Their specific elf-like ears, triangle head, big round eyes, and curly coat make them look like the small elfish creatures that live in a deep forest.

But this type of cute grey cat is loved not only due to its extravagant appearance. Look inside and you’ll see how charming and lovable these cats can be. They are extremely sociable and outgoing, they get along well with kids and they can be easily trained like a dog. 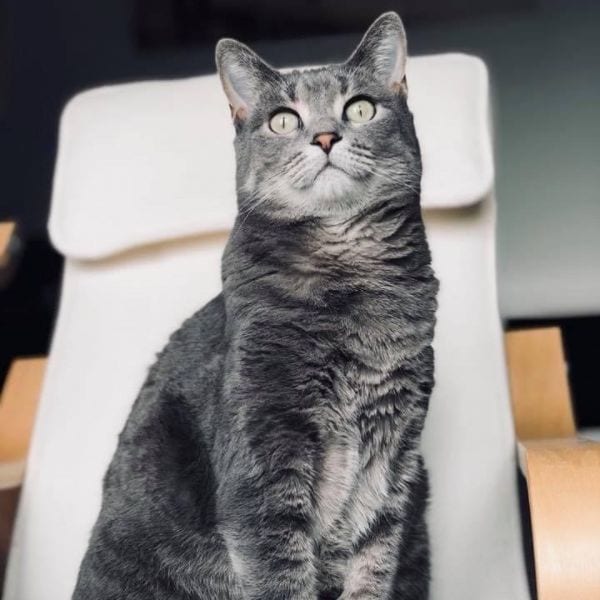 What is the breed of a GREY cat?

This is an active and energetic creature that comes in hues of dark grey and is often known as the Chartreux. It is one of the oldest grey cat breeds that has strong ancient roots. Its origin dates back to the 18th century and its motherland was France.

How many GREY cat breeds are there?

There are just three grey cat breeds. Only the Russian Blue, the Korat, and the Chartreux come in the grey color without any other shades.

That is quite an abstract question and it is difficult to provide a clear answer. As stated above, there are a lot of cat grey types and they all have some temperament peculiarities that differ them. However, a recent study has shown that most grey color felines feature a peaceful, calm and affectionate personality and that makes them perfect family companions. Moreover, grey tabby cat breeds as well as grey and white tabby cats are described as home-loving, tender, and even lazy felines.

Are all GREY cats rare?

Most people adore grey cats. But are grey cats as rare as we usually think? Actually, the grey shade of the cat coat is just a lighter version of black and nothing more. There are a lot of kitty breeds of solid grey fur as well as patterned coats. This means that you have a wide choice of grey cat types to select from.

What breed of cat is gray and white?

Generally, there are several grey and white cat breeds. The list of this peculiar category of felines includes Russian Blue (white and dark grey cat with green eyes) and Ragdoll (white and grey cat with blue eyes).

There are only three grey cat breeds and a lot of grey cat types and each one features its own specific personality traits as well as unique looks. Grey cat breeds are loved worldwide and are usually included on the top lists of the most popular cats on the globe.

Thus, if you think about whether to bring a grey kitty into your house, check out this list of the 11 grey cat types and choose the most appropriate feline depending both on its appearance and temperament features.