Since ancient times, many signs and prejudices have been associated with a black cat surrounded by a mystical halo. In the Middle Ages, people considered these beautiful creatures accomplices of dark forces and the companions of witches.

Speaking about the mythology of different peoples, the symbolism of a black cat is displayed ambiguously. For some nations, the black cat is associated with misery and evil, but in many cultures, this animal has positive symbolism. So, the Egyptians considered cats to be messengers of the goddess Bastet, who personified the sun and moonlight. For the ancient Greeks, black cats were associated with the goddess Artemis, and the ancient Romans identified the cat with the goddess of fertility – Diana.

All cats are cute and lovely, but black cats with blue eyes are especially attractive. Black cats with mysterious blue eyes cast a spell on people. It is impossible to get rid of the gaze of their enchanting eyes, and their friendly and easy-going personality conquers the hearts of millions of people.

How Common Are Cats with Blue Eyes?

Kittens are born with blue eyes regardless of their breed. After 8-10 weeks, the color of the eyes changes, and most often it changes to greenish or various brownish shades. Many breeds of cats have blue eyes, but adult black blue-eyed cats are quite rare.

There is one blue-eyed mutation of the Ojos Azules breed in the world. Its name is translated from Spanish as “blue eyes”. For the first time, a blue-eyed tortoiseshell wild cat was discovered in Mexico in 1984 and was named Cornflower.

The Science Behind Blue Eyes of Black Kittens

Black cats have blue eyes, but this occurs extremely rarely. Blue eye color is a mutation and is inherited only with the recessive So white spot gene. This means that pigmentation is only blocked at the tip of the tail and in the iris of the eye. The iris is the colored part around the pupil.

It consists of two layers, one of which contains pigment that gives color to the eyes. Blue-eyed cats lack the cells that produce this pigment. Consequently, these cats have a transparent eye covering, and the blue color arises from the refraction of the color.

Do Cats with Blue Eyes Have Trouble Seeing?

The charm of blue eyes in black cats comes at a price – most cats have vision problems or are blind. An animal’s eye color is associated with genetic factors. After kittens are born, they only open their eyes after a couple of weeks. In some cases, the color of the eyes remains blue. Experts believe that blue eye color is associated with a lack of melanin, which is responsible for the color of the pigment.

Are Cats with Blue Eyes Deaf?

It is believed that blue-eyed cats are often deaf. However, most often, hearing impairment caused by degeneration of the inner ear occurs in blue-eyed white cats, and this problem is associated with the “W” gene. The connection between the white color of the coat, the blue color of the eyes, and deafness was noted by Darwin. However, the pleiotropic effects of the “W” gene (deafness and blue eye color) are not manifested in all its carriers. Deafness can be both bilateral and unilateral. It is believed that in completely white cats with different colored eyes, deafness usually occurs in the ear located on the side of the blue eye.

The Genetics Behind Deafness: The “W” Gene Curse

The “W” gene is associated with inner ear dysfunction and may play an important role in your cat’s deafness. This gene is responsible for the white color of cats. It is believed that completely white cats with blue eyes always have poor hearing. However, this statement is a myth, since only 5% of white cats have hearing problems. When comparing blue-eyed white cats and blue-eyed black cats, the percentage of white cats with hearing problems is greater than the percentage of black cats.

How Do You Tell If a Kitten’s Eyes Will Stay Blue?

Is coat color associated with the eye color?

In most cases, eye color is related to the coat color of the cats and their breed. In general, cats have green, brown (hazel), golden, or copper eyes.

Brown (hazel) eyes are most common in mongrel cats. Blue eye color is obtained only in cats with some form of white color in their coat (white, white spotting, colorpoints).

Table of correspondences of the color of eyes and coat color

What breed is a black cat with blue eyes? There are many breeds that can capture your heart.

If you are looking for a beautiful fur baby – a black kitty with blue eyes, then you may consider the following breeds. 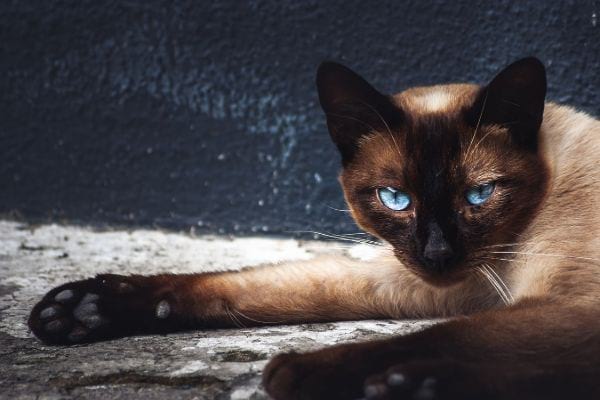 The graceful Balinese cat is a medium-sized cat with a long, elongated body. The Balinese cat is a very energetic cat that loves to play. On top of that, they are extroverts who need constant communication with their owners. These fluffy cats with beautiful fur and piercing blue eyes are extremely intelligent, very loyal, friendly, and docile animals. This cat can be a lap kitty, but at the same time, he will never distract the owner. This breed is the result of crossing Persian and Siamese cats. These felines have a bi-color coat color and are distinguished by curiosity and their loving, affectionate nature. However, these cats are not suitable for people looking for very active and playful pets. These cats are among the largest representatives of domestic cats. The coat of Ragdoll cats is medium-length and silky. These lap cats are docile, affectionate, and very attached to their owners.

Blue eyed black kittens are mesmerizing felines that will capture your heart and become your faithful companions. Choose the breed that matches your needs and expectations, and enjoy the beauty and lovely personality of these unique cats.